On the Altar of Art

A prophet may always be without honor in her home country, but Isadora Duncan may finally have won respect in America.  It happened last night at a jam-packed Joyce Theater, where a famous ballerina gave a boost to a sworn enemy of ballet.  Isadora would have been amazed.

Sara Mearns of New York City Ballet joined the Isadora Duncan Dance Company, briefly, for a solo to Chopin's "Narcissus."  Duncan's choreography has probably never been performed with the articulation, power and speed Mearns brought to it. It was exciting, electric, especially the upsweep of her moving turns. But it wasn't strictly Duncanesque.
Read more »
Posted by Tom Phillips at 12:13 PM No comments:

Circus with a Purpose

Midway through Cirkus Cirkor's "Limits," aerialist Saara Ahola asks the audience to join her in a little trick: stand up with your feet together, close your eyes, and remain standing. Be careful in the balcony, she says, and with good reason. We immediately feel ourselves swaying, shifting our weight to stay in balance. The lesson is this: the world cannot keep its balance by holding still, it constantly needs to shift its weight, to allow movement. She asks: what happens when the world is in a great upheaval, and suddenly borders are closed, people arrested, stranded, abandoned, drowned? Will the whole world lose its balance and fall?

Read more »
Posted by Tom Phillips at 7:29 AM No comments: 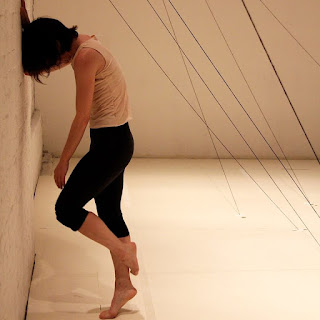 In Part One of this conversation, Laura Peterson talked about the sea-changes in her art over the years --- from satire, through abstraction, to a complex vehicle for personal, emotional expression.

After years of being cast as microscopic bugs and atomic particles, Peterson and her dancers emerged as human beings in 2012, in a piece called “Failure.”  It addresses a universal human experience, but you’ve never seen the human condition rendered like this. The unique touch is the scenery -- a huge kite-like construction, designed to collapse during the performance.

Laura Peterson is the daughter of an academic philosopher, but as an artist she is also the child of the Judson School – drawing on the ideas incubated at Judson Memorial Church in the 1960s – among them minimalism, repetition, unusual settings and collaborations with other arts, and chance combinations.  In “Failure,” it all comes together. We see choreography as philosophy – a working out of the paradoxical relationships of determinism, chance, and human will.  And in a particularly satisfying twist, we can see it this summer at Judson Memorial.   “Failure” will make its New York debut in that sacred space, June 29 through July 1. In March we talked about the work, and its new, post-election incarnation.

LP:  “Failure” I did after “Wooden” in 2011.  Something happened there, in “Wooden,” when we’re running back and forth, over and over, but I didn’t think it went far enough.  I could see a possibility there, the possibility of exhaustion, and that it has an emotional quality to it.  And then I thought, when does the body fail?  What are your personal physical limits?  And can you go farther than that, can you ask more of your body than that?  The 2012 Olympics were happening then.  And I looked at people’s effort, and their limits, and then more effort and passing a limit you think you have.  And then watching somebody collapse, because their effort goes beyond their limit.  And then you become a person, which is excruciating.  I keep thinking, why do I have to have limits?

TP:  For me, “Failure” is the most clearly realized piece you’ve done, because the concept is very simple.   It’s just that people tend to avoid it.  They don’t want to talk about it, everyone wants to be a success.  But even success has its limits.  And then what?

Read more »
Posted by Tom Phillips at 6:13 AM No comments: