This article was originally published online, in slightly different form, in  ANQ: A Quarterly Journal of Short Articles, Notes and Reviews  12/28/2020.

Geography is destiny in two modern masterpieces – James Joyce’s Ulysses (1918) and Bernard Malamud’s A New Life (1961) – but these destinies point in opposite directions. Joyce’s Dublin faces East across the Irish Sea to England; Malamud’s fictional Marathon, Cascadia west over the mountains to the Pacific.  Cascadia is green and fresh, the air clear, nature an “esthetic satisfaction” so overwhelming that art is superfluous.  Dublin is “snotgreen”, reeking of dead men, dead dogs, poor old women, “general paralysis of the insane” all seen through Irish art, the “cracked lookingglass of a servant.”

Enter into these opposite landscapes a single archetype, the wandering Jew -- outsider, observer, “chief critic of everything”. The aim of this essay will be to point out the direct relation between characters and episodes in these two novels – notably Joyce’s Leopold Bloom and Malamud’s Seymour Levin. This link is repeatedly suggested by Malamud, beginning with the epigraph of A New Life, a quote from Ulysses: “Lo, Levin leaping lightens in eyeblink Ireland’s western welkin."  A New Life can be read as another variation on Homer’s Odyssey, a bid by Malamud to extend the epic of human civilization to America’s farthest shore.  Spiced with biblical references, it is also the story of American Jews’ liberation from cyclical tragedy in the Old World, and the hazards of their new life in the New.
Read more »
Posted by Tom Phillips at 4:55 PM No comments:

Inauguration Day and the Pandemic both played into the hands of artists at LaMama's annual festival of dance, this year on video instead of downtown in New York.  Norwegian choreographer Kari Hoaas and Argentine-American Annabella Lenzu had to adapt work originally meant for LaMama's theater space.  And while their creative solutions narrowed the scope of their pieces, they may also have sharpened their focus.

Read more »
Posted by Tom Phillips at 5:35 AM No comments: 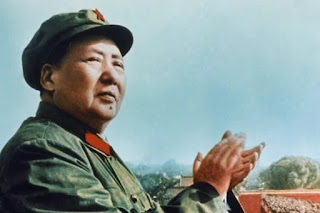 The first rule of a revolution is that you need to win it; because you'll be harshly punished if you fail.

Mao Zedong, who won the biggest revolution of the 20th Century, wrote:  “A revolution is not a tea party, or writing an essay, or painting a picture, or doing embroidery...  A revolution is an insurrection, an act of violence by which one class overthrows another.”

President Trump has been impeached for "incitement of insurrection," but it wasn't a real insurrection, and had no chance of winning.  It was just the the final episode of play-acting in a show that's been running for four years, a fantastical grand finale in which five people actually died.  Mr. Trump lives by appearances, and can't cope with realities -- e.g. the Coronavirus, or the election results.  He keeps thinking he can fix things without doing anything about them.

This week, as he summoned a mob and sent it against Congress, he failed to understand that a show of force is not the same as actual force.  Actual force performs work, as in one class overthrowing another.  A show of force is just a photo-op.

Read more »
Posted by Tom Phillips at 8:45 PM No comments: 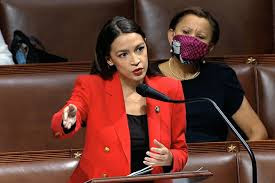 2020 was an epic year for news, but not for noble speeches. The Quotes of the Year were more like the oaths of warriors in combat: bravado, trash talk, mayday calls, dying gasps and pleas for mercy.

"It is what it is.."  Donald Trump on August 31, downplaying US deaths from Covid-19 ".. because you are what you are."  Joe Biden, blaming him in the first presidential debate September 29.

“I can’t breathe.”  George Floyd, as he lay dying under the knee of Minneapolis police officer Derek Chauvin May 25.  When Biden was declared president-elect November 7, CNN commentator Van Jones broke down on camera, weeping for his children and friends.  "It wasn't just George Floyd," he said through a flood of tears.  "A lot of people …felt they couldn't breathe."

"Kill me!"  Luis Vasquez, a neighborhood resident who fired gunshots into the air in front of the Cathedral of St. John the Divine in New York, following a Christmas concert on the Cathedral steps December 12.  Police shot him dead.  The gunman's sister said he'd been "damaged" by prison time in the 1990s, and his mental state had worsened in the pandemic.

In the early 1960s, choreographer Murray Louis took a ride up the escalator at Macy’s, the world’s largest store.

''I looked at rooms and rooms .. waves of coats and shirts,'' he told the New York Times. ''I thought, 'Who buys this?' And suddenly I had an image of excess as a theme.''  Shortly after, Louis attended a country auction where he bought a bundle of old umbrellas. He opened them up: ''They were all completely eaten away. It was wonderful.”  He had one thought: “It all turns to junk.”

Out of this, in 1964 Louis and Phyllis Lamhut made a wonderful duet, set in an alley that steadily filled up with the detritus of a shopping spree – heaps and piles of paper bags, filled with goods destined to decay and disintegrate.  They called it “Junk Dances.”  Fast forward to 2020, and choreographer Jody Sperling is on the Down escalator, contemplating the end times of our long national shopping spree.  She calls it "Plastic Harvest."

Today a tsunami of accumulated junk is filling up the whole earth.  And instead of paper bags full of ephemeral objects, we have mountains of plastic bags, filled with plastic products that will not decay or go away.  In 1964 our consumer products all turned to junk.  Today they start out as junk, and turn to toxic waste.

“Plastic Harvest” is a Covid-era virtual work in progress, a video featuring four dancers in costumes fashioned from plastic bags.  Anika Hunter opens in a tub, taking a bubble bath in a sea of crackling plastic.  As she periodically disappeared under the surface, I thought of the warnings on some bags – danger of suffocation.  Hunter begins and ends her bath reading a book – “So You Want to Talk about Race.”  It’s a crisis, for sure, but not the one that’s immediately surrounding her.  Like the American consumer she appears unconcerned, even as she slips under the waves.

Maki Kitahara follows in a wide-sleeved kimono made of bags tied and hanging from her outstretched arms as if from a clothesline.  This too is a disappearing act, through a trick of Sperling’s camera that shoots her in a split-screen mirror image.  Turning toward the center she disappears, turning outward she splits into two.  An identity crisis – is it a person, two persons, plastic, or nothing at all?

The grand finale is a whirling balletic folk dance in swirling tutus and puffed plastic sleeves, intercut between Frances Barker on a suburban street and Andrea Pugliese-Trager in New York.  Both wind up crossing an intersection – Pugliese-Trager through a construction zone, Barker past a Stop sign into a weed-strewn vacant lot.

Obviously, more questions than answers in this work-in-progress, but that’s as it should be.  The camera work is sharp and the split-screens stunning.  It’s all kept driving by Matthew Burtner’s repetitive score, which sounds like the infernal combustion of some satanic micro-mill.

Besides the dancers, the most striking visual was the unheeded sign that said STOP.   Hey, it's not too late… 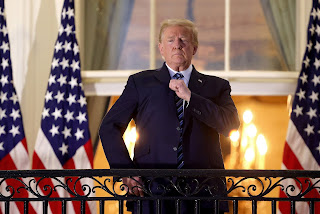 The manuscript fragment below was recently discovered by Operation Warp Speed, the Trump administration's campaign to develop a vaccine before election day. Sources say the project had accelerated to several times the speed of light when engineers discovered they were in a time warp.  The manuscript was discovered stuck to the windshield in the year 4525 CE.  It was damaged during the rapid deceleration that followed as team members worked frantically to return to their present lives. It appears to tell the story of the 2020 presidential campaign, in the language of a latter-day Bible.

In the fourth year of the reign of King Donald, in the second month, the Lord sent a bug to plague the people of the earth, as a sign against the king because he did not love justice.

The prophet Woodward went to the king, and he was afraid.  The king said, "You just breathe the air and that is how it is passed.  It is also more deadly that even your strenuous flu.  This is deadly stuff."  And the prophet wrote that in his book.

Then the king went to tell the people. He stood at the gate and told them, "When it gets a little warmer it miraculously goes away.  The King of China is working hard and it's going to work out fine."  And the people went home and did not fear the plague.

A flock of Monarch butterflies – stopping for the night in the Hudson Valley on their way to Mexico --- greeted early arrivals Saturday in Untermyer Park and Gardens, high above the river in Yonkers.  Their visit was unscheduled, but no more an accident than the gust of wind which an hour later lifted the silken wings of three dancers to Chopin’s “Butterfly Etude,” nor the shaft of light from the setting sun that illumined Gluck’s “Bacchanal.” Isadora planned it that way.

Nearly a century after Isadora Duncan’s dancers performed in Samuel Untermyer’s open-air amphitheater in 1923, Lori Belilove and her Isadora Duncan Dance Company returned for an encore. And if Isadora was ahead of her time, her self-anointed successor Belilove is right on time with this revival.

Read more »
Posted by Tom Phillips at 6:24 AM No comments: