White Noise: Overheard at the Biennial

Writers who cover Art are much more glamorous than we ordinary journalists; I noticed lots of leather and leopard-skin on women at the Whitney Biennial press preview.  (Faux, naturellement, but  expensive.) Two scribes were chatting in the row behind me as we awaited the news conference.  I didn't turn around, but took these notes:

Says the one:  You know, I skipped the War-hole (Warhol) show.  I skipped it because I just don't like him. It seems to me he represents all that's worst about us -- the commercialism, the celebrity, sensationalism. Enough of War-hole, I say, let's move on!

Her friend agrees heartily, calling Andy Warhol the "father of Jeff Koons and Damien Hirst." They move on. Says the one:

-- Someone asked me to write an article about art collecting. I don't want to do it because I don't believe in collecting art.

Says her friend:  But you're a collector yourself!

Her daughter is a senior at an ultra-prestigious Ivy League college, where she's working on the student newspaper. She told her mother she was thinking of going into journalism. Her mom's  reaction:

-- I told her, I said:  Over my dead body are you going into journalism!

Posted by Tom Phillips at 8:38 AM No comments:

Neck-deep in controversy before it even started, the 79th Whitney Biennial opened this weekend, promising a “snapshot of contemporary art-making in America.” The exhibit showcases emerging young artists, and lifts up the poor and marginalized, in the art world and American society. It also exhibits the museum's own contradictions.

Exhibit A is a film about anti-personnel weapons that are  manufactured and sold by a director of the museum. Warren B. Kanders is CEO of Safariland, which sells tear gas canisters and other weapons to police departments and governments including the US. The film by Laura Poitras unveils a technology that can track the use of these weapons – and did when they were used by US troops against asylum-seekers at the Mexican border. Safariland’s new tear-gas product “Triple Chaser” works like a cluster-bomb, breaking into three pieces when it hits the ground. The film details the effects of the gas on its victims – as well as the bloody effects of bullets the company sells to the Israeli army, which fired them against Palestinians charging the border fence at Gaza.

Kanders says he is “not the problem” and has resisted calls for his resignation or ouster. To him, the problem is rioters and demonstrators endangering the police and soldiers who “keep us safe.”  But who exactly is “us?”  The exhibit as a whole identifies with the poor, people of color, the excluded and rejected -– and artists, struggling to survive in an art world so deeply implicated in the politics of privilege and oppression.

A few impressions from a fast preview:

A series of back-country and inner-city photographs by Curran Hatleberg showing the resilience of the poor, comfort amid squalor. Politics be hanged, these people say, let’s play dominoes, crawl over a broke-down truck, fool with a snake, sit by the river and smoke.

An animated cartoon of NFL football scenes that shows pity for everyone -- players kneeling at the national anthem, others standing defiant or doubt-filled, soldiers venerating the flag, the band playing on, schlumpy photographers recording the historic muddle.

The biggest, loudest statement in the show is a zombie-like outdoor "Procession" by Nicole Eisenman.  Its ruined slaves and captives made me think of a Fourth of July parade in the Hell we're headed for.

But the signature piece, to me, was one with a quieter irony: a large woven rug by American Indian artist Nicholas Galanin simulating a TV screen without a signal – nothing but “snow.” He calls it “White Noise: American Prayer Rug."

White noise, black lives, zombies on parade, and the Gordian knot of oppression paying for the art  that rails against it. It’s impossible to take a snapshot of America, the field of vision is too wide. But curators Ru Hockney and Jane Panetta combed the countryside to try to get the sweep of it. The result is broad, inclusive, gutsy, fresh, real.

It runs through September 22 at the Whitney.

Posted by Tom Phillips at 3:52 AM No comments:

Great artists know where they shouldn't go.
George Balanchine, for example, never choreographed to Beethoven, because he said Beethoven's works were complete in themselves, nothing to add.  Mark Morris could have used that kind of discernment when he accepted a commission for a 50th-anniversary tribute to the Beatles’ masterpiece “Sgt. Pepper’s Lonely Hearts Club Band.” The resulting “Pepperland” is an uncharacteristically shallow work that does worse than add nothing. It subtracts much of the album's best content -- no Lucy, no Rita! -- for original segments by composer Ethan Iverson that have only fleeting connections to the Beatles. Beyond that, the whole project completely misses the spirit and style of "Sgt. Pepper."

The Morris troupe has perfected a casual, communal style of ensemble dancing that celebrates relationships, particularly those among its dancers, who typically spend many years collaborating until their movements and mannerisms meld into each others'. This is almost a Platonic ideal of society transformed by dance. Unfortunately, it is completely at odds with the content of “Sgt. Pepper,” which brings to life a gallery of misfits and loners pursuing fantastical dreams. Morris might have reached his Platonic ideal in response to Sgt. Pepper's loneliness. But to get there he would have to walk his company through descending levels of Hell, like Virgil leading Dante. And this he would not do.

“Pepperland” begins with a promising gesture: a tight circle of dancers opens out from the center of the stage, unspooling like the grooves of an LP record. But the imaginary world the Beatles created on that disk, the psychedelic trance of “Lucy in the Sky,” the stuck-in-a-groove frustration of “Getting Better,” the narcissistic self-pity in “She’s Leaving Home,” the loopy frustration of “Lovely Rita,” and most of all the thunderous moral critique of “A Day in the Life” are all absent or caramelized into playful, sentimental pas de deux.

“When I’m 64” is a three-ring clown circus, full of gawky leaps and flopping around in groups, but the comic pathos of "will you still feed me?" is unfelt. The only song this work seems to take seriously is George Harrison’s eastern meditation “Within You Without You,” lamenting the “the space between our souls.” Harrison echoes the theme of "Sgt. Pepper" but his lyrics lack the bite of Lennon and McCartney’s –- a problem the Beatles solved by isolating this cut at the beginning of Side Two, and following it with a laugh track. Morris makes it central to “Pepperland,” with a crossed-legged dancer meditating center stage.

As for the sound: One of the Beatles' great innovations in popular music was the import of classical elements, most strikingly the harpsichord and string passages composed by producer George Martin. Still the Fab Four were fundamentally a rock band, inspired by American Rhythm-and-Blues and its solid, gritty core. Composer Iverson ignores the roots and embraces the refinements. His arrangements play around with Beatle tunes but excise their soul, banishing the thumping beat of rock for a light, airy, often atonal classical-jazz. The dancing follows the music -- predominantly classic-jazzy, with character shoes and a lot of ballet steps.  Morris makes it flow with his weaving, looping moves for shifting groups of dancers. Very charming as always, but it looks more like a tribute to Balanchine than the Beatles.

“Pepperland” is a place Mark Morris should never have gone. And if you love "Sgt. Pepper" as complete in itself, neither should you.

Posted by Tom Phillips at 6:48 PM No comments:

Parable of the Plant Kingdom 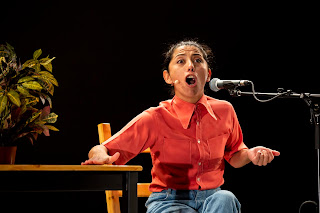 In medical Spanish, "Estado Vegetal" means a vegetative state, where basic life functions go on but consciousness and thought are lost. Politically, a "Vegetative State" could mean rule by the plant kingdom. This intense theatrical piece, starring a young Chilean woman and an array of potted plants, suggests such a state is exactly where humanity is headed.

Read more »
Posted by Tom Phillips at 8:58 AM No comments: